In this blog post, you will be introduced to the term jobber in Stock market in India.

To begin with, you need to know that "jobber" is not the name of the profession; it is a self-descriptive term for people who deal with stocks and shares outside of the stock exchanges so they can buy and sell stocks for their own account.

Who is a Jobber in Stock Market in India?

A jobber in Stock market in India is a dealer or broker that buys and sells stocks for its own account.

They do this by matching buyers with sellers, without actually owning any of the shares they are trading.

Jobbers have an important role because they take on risks by being exposed to changes in share prices while acting as intermediaries between traders who want to buy and sell shares.

Some jobbers make a market by quoting firm prices at which they will buy and sell shares, while others act as dealers who only quote the buying or selling price.

A jobber is also known as a Market maker. A jobber typically makes a market by declaring the buying and selling price at which he stands ready to deal. When quoting prices, he may make reference either to his own standard terms.

Some examples of Jobber in Stock Market in India

Earlier when somebody bought 100 shares in a particular company say ABC Ltd., his stockbroker did not have to search for someone who wanted to sell those 100 shares.

Alternatively, he would simply go to a jobber with an ABC Ltd. shares inventory and get the shares.

If somebody wanted to sell their portfolio, his broker could also offer it to the jobbers.

This is how the jobbers play the role in facilitating the buying and selling of securities.

The jobber would then let his network know that he has 100 shares in ABC Ltd to sell, and soon another dealer will approach him with an offer for these same 100 shares at a certain price.

Once they agree on a price, it is done! The jobber then has a new 100 shares in inventory to sell.

In this way, the jobbers become facilitators of a trade by acting as either buyers or sellers for their own accounts.

Also read: What is CE and PE in Share market?

Some key points regarding Jobbers

How do Jobbers work?

Jobbers are not stockbrokers. Jobbers facilitate trades between buyers and sellers, but they're also the least regulated link in the chain from security issuer to investor.

The jobber can be an important part of a market for small or thinly traded securities that lack depth because he provides liquidity by buying and selling his own inventory.

As with most market participants, the jobber is most useful when there are more buyers than sellers or vice versa.

The jobber makes a market by declaring buying and selling prices at which he is willing to deal.

When quoting prices, the jobber may refer either to his own standard terms or those in effect on some other day for comparable transactions.

History of Jobber in Stock Market?

The 'Big Bang' in October 1986 signaled the demise of single-capacity members of the Stock Exchange, which ended the jobbing system.

During the nineteenth century, this system had taken on a recognizable modern form as the variety of financial instruments traded in increased.

At least half of the members of the Stock Exchange began specializing in providing a continuous market for one of the most popular kinds of these securities.

The distinction between these market-makers, often known as jobbers, and brokers who dealt with them on behalf of the public was clear-cut, but it was based primarily on custom until 1909 when single capacity was specifically stated in Stock Exchange regulations.

By the time World War, I began in August 1914, there were roughly 600 small businesses and many one-man jobbing firms.

These amounts declined as the institutional investor took over for the private one, and jobbing capital requirements exploded.

By the eve of the 'Big Bang,' there were only five major jobbing firms on the floor of the Stock Exchange, despite a numerical decline that did not necessarily imply a fall in marketability.

Difference between Jobbers and Brokers

Jobbers do not act as agents on behalf of their customers, but rather buy and sell securities for themselves.

Brokers are paid by commissions or fees from the transactions they carry out for clients through their firms' trading departments.

Jobber's role is to facilitate trades between buyers and sellers without acting as an agent for its own account.

Jobbers are not stockbrokers. Jobbers facilitate trades between buyers and sellers, but they’re also the least regulated link in the chain from security issuer to investor.

Jobbers were part of the stock market, in both London and New York exchanges.

They operated in the secondary market. They were involved in trading stocks or commodities for their own account or to meet orders from brokers. In this latter case, they acted as commission agents.

In the modern world, due to digitization, Jobber in Stock Market is no longer utilized. Investors and traders may now simply sell by clicking a button on their phones.

This is all we have to say about Jobber in Stock Market from our side. If you have any questions, please leave a remark below.

Who is a Jobber?

Jobber is a British term for what Americans refer to as a market maker in the United States. This is someone who maintains a stock of assets in order to facilitate trading.

Do jobbers still exist in the stock market?

No, stock jobbers do not exist in the modern market. After Digitization trading in the Stock Market has become very easy. Now people can trade even with their smart phone.

What is Jobber in Stock Market in Hindi

How to become a Jobber in Stock Market?

You can not become a Jobber in Stock Market since jobbers do not exist in the modern Stock Market. After Digitization every individual can now place their own buy and sell orders without the need of any Jobbers. 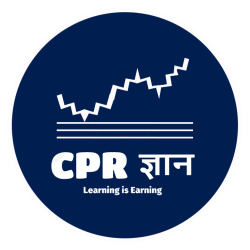 At Cprgyan.in we as a team provide knowledge about the Indian Stock Market. Here we cover each and every topic related to the stock market from basic to advance level.